WATCH “Preparing for the Storm”

REMEMBER WHEN A TROPICAL STORM OR HURRICANE IS APPROACHING: Taping windows is *NOT* helpful & will not keep glass from breaking.

Realize the forecast cone (”cone of uncertainty”) is the average forecast error over a given time – out to 5 days – & *does not* indicate the width of the storm &/or damage that might occur.

*** Impacts from Nicole including very high rip current risk at NE Fl./SE Ga. area beaches through this week… folks living in or traveling to the Bahamas, Florida & east coast of the U.S. should stay up to date on the latest forecasts *** ….

For Jacksonville/NE Fl./SE Ga. specifically (given *current* forecast of ‘Nicole’):

* Surf & breakers reaching double digits by late Tue. & – at times – will be 12+ feet along area beaches from Wed. through Fri. Seas will be 20+ feet & extremely rough just offshore. All marine craft should remain in port & secure vessels & equipment.

* Flooding will be a daily threat at the beaches, especially at high tide – becoming more significant with each day through this week. There will also be an astronomical boost due to the full moon phase which begins Tue. Ponding & – eventually flooding – will also occur along the St. Johns River & its tributaries.

* As Nicole moves south then west of Jacksonville, there will be a tornado & waterspout threat late Wed. & especially Thu. into Fri. across NE Fl. & SE Ga.

* Inland impacts are likely to be realized by mid to late week in the form of wind, rain, flooding & tornadoes BUT WILL BE DEPENDENT ON EXACT TRACK & STRENGTH OF THE STORM.

Low pressure – ‘98-L’ started to develop over the SW Atlantic north of Puerto Rico & was upgraded to subtropical storm “Nicole” early Mon., the 14th named storm of the Atlantic season which is right on avg. & close to the Nov. 19 avg. of the occurrence of the 14th named storm. Don’t get caught up in semantics whether subtropical or tropical when it comes to impacts as Nicole will gradually become purely tropical before reaching Fl. late Wed. into Thu. Initially – Nicole is clearly a subtropical low but should eventually transition to a purely tropical system given the very warm water from Fl. to the Bahamas in addition to an upper ridge building near & north of the storm as an upper level trough that helped spawn Nicole weakens & moves away. This will be a fairly long process: slow to develop as the subtropical storm with frontal features then becomes purely tropical (warm core)… will move slowly northwest before before being steered west & southwest once established (deeper/stronger) & as the ridge to the north becomes stronger while a trough moves into the U.S. Lower 48 helping to create the alleyway from Fl. up the eastern seaboard. The trough will become a major “player” by late week helping to dictate the longer range movement & perhaps aiding in the strength of Nicole.

Most concerning is that conditions appear rather optimal for strengthening once Nicole becomes tropical & tightens its circulation as the storm starts moving west/southwest. Shear will be decreasing, moisture increasing & sea surface temps. are warm including pretty significant deep oceanic heat content (warm water to a deep depth). I’ve noticed multiple times over the last 20+ years that southwest moving/digging tropical cyclones often intensify. This greatest potential appears to be Wed./Thu. with a landfall on the Fl. southeast coast early Thu.

Global forecast models have been trending toward rather remarkable agreement (for a storm in its infancy & still days away from becoming better organized) with the low moving west/southwest… hitting South & Southeast Florida… then as far west as the Eastern Gulf or Fl. west coast… before feeling the effects of a strong upper level trough that will then finally pick up the storm & steer it north & northeast while accelerating. The GFS is the strongest with Nicole & therefore is a little faster to turn Nicole northward. The European & UKMET models are weaker & take Nicole to the Eastern Gulf before a turn north/NE. All 3 models are similar on timing. The approaching upper level trough late in the week should help to “ventilate” the mid & upper levels of the atmosphere over Nicole which should at least maintain the storm for a longer time than might otherwise be the case. In addition, increasing southwesterly shear will be in tandem with Nicole’s movement lessening the effect of the increasing shear of the front right quadrant of the jet stream. As Nicole gets “captured” by the trough & hooks up with a cold front, there will be a transition to post (non) – tropical that will then accelerate to the northeast moving up the U.S. east coast by the weekend. Dry air will quickly spread eastward “under” – to the south – of Nicole’s center bringing a quick end to rainfall with diminishing winds for NE Fl./SE Ga. by at least Fri. night/Sat.

It is expected that Nicole will attain hurricane strength between the Bahamas & Fl. should hit SE Fl. as at least a Cat. 1 hurricane. Impacts are expected for all of Fl. except for most of the Panhandle… in addition to the Bahamas + parts of the Carolina’s to perhaps as far north as Chesapeake Bay & New England in the longer term.

One thing for sure: there will be an extended period – 5+ days – of strong to very strong onshore flow… rough seas & surf with double digit breakers at the beaches… gusty & – at times – strong winds… rain, heavy at times. It appears *at this time* that the peak of these impacts will be from Wed. through Sat. The exact details remain somewhat fuzzy & very much in flux & there will be some changes to the forecast as to the exact extent & timing of impacts but Nicole will undoubtedly be a significant storm for at least the east coast from Florida to the Carolina’s.

Stay up to date across all of Fl. & much of the Southeast U.S. coast & the Bahamas.

Spaghetti plots for Nicole – includes ensemble models (NOAA: address underlying uncertainties in the input data such limited coverage, instruments or observing systems biases, and the limitations of the model itself. GEFS quantifies these uncertainties by generating multiple forecasts, which in turn produce a range of potential outcomes based on differences or perturbations applied to the data after it has been incorporated into the model. Each forecast compensates for a different set of uncertainties):

Spaghetti plots for ‘97-L’ which will stay over the open N. Atlantic but may briefly become “Owen”:

Shear is currently strong across most of the SW Atlantic with speeds of 30+ mph. However, the upper level atmosphere will be undergoing some significant changes over the next 5 days that will include less shear & a building upper level ridge to the north of the low. At the same time, a strong upper level trough will be digging into the Central U.S. & eventually into the Eastern U.S. This strong trough will be critical to the eventual movement – including curvature to the north/northeast – & intensity of the storm. The added upper level ventilation from the trough may aid in intensifying the storm… or at least maintaining the storm as it eventually accelerates to the northeast. Following this trough, there will be a serious invasion of cold air across the Lower 48 as the tropical system seems to be a catalyst for a pattern flip reminiscent of “Wilma” in 2005 which hit Fl. Oct. 24th & was followed/guided by a deep trough moving across the Lower 48. 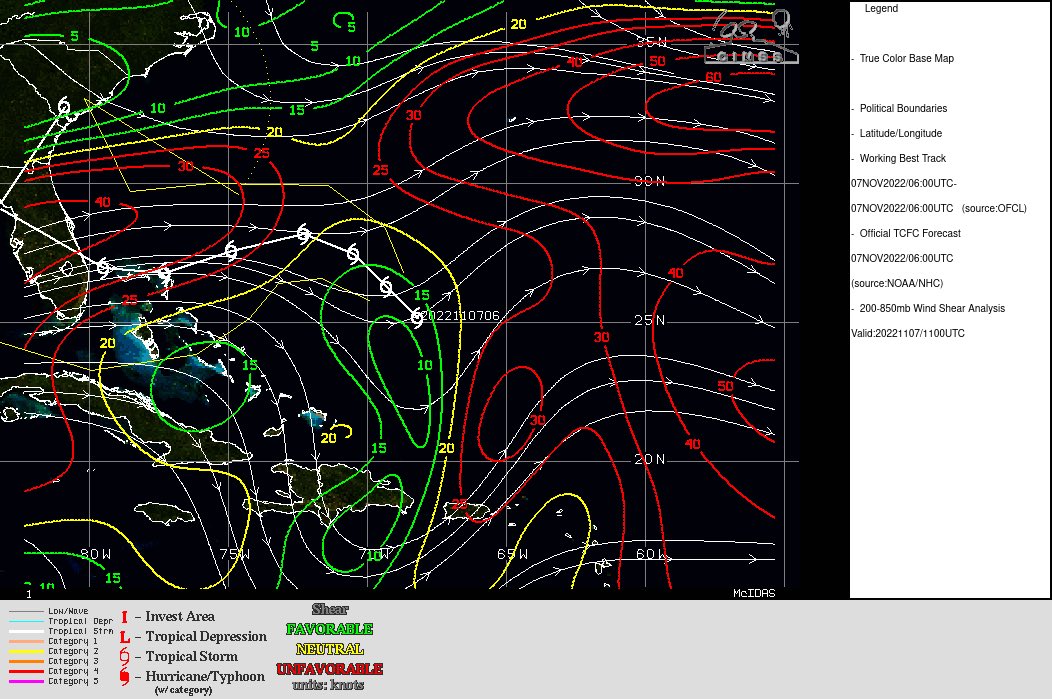 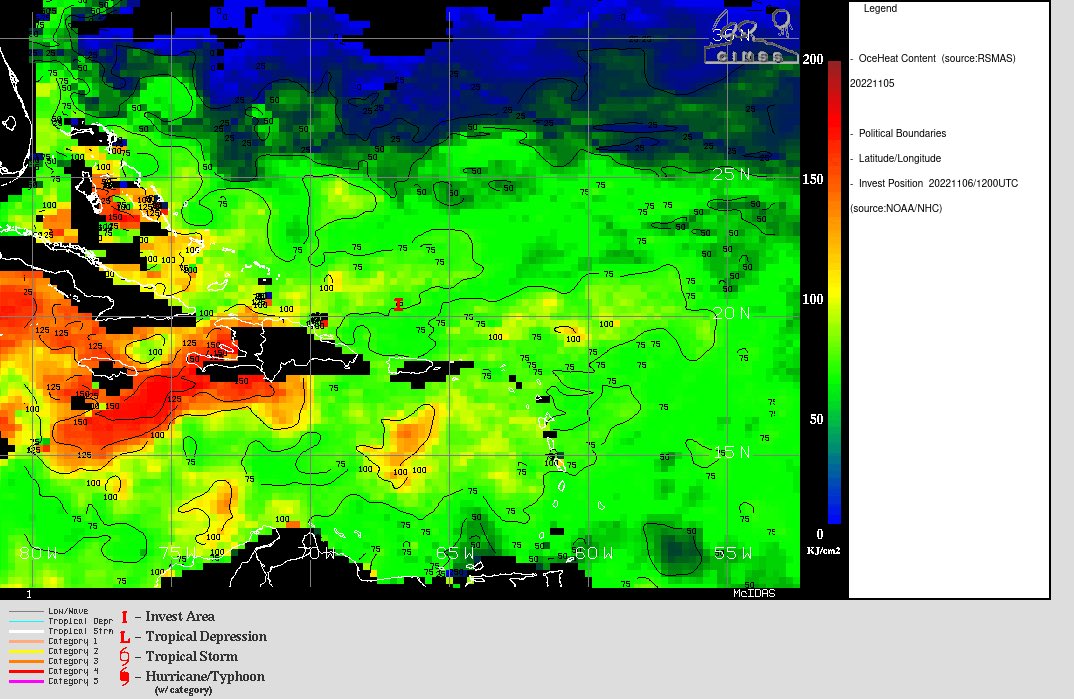 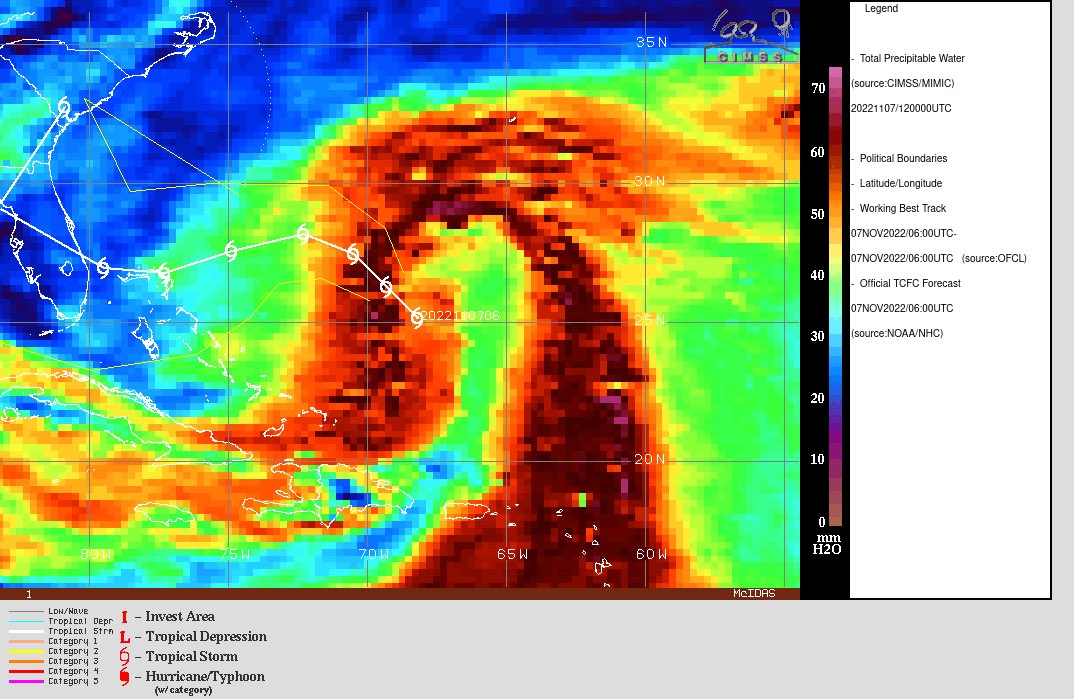 Water vapor loop shows pockets of dry air (dark blue) across portions of the Atlantic Basin along with a lot of “swirls” (low pressure) along with “bands” of higher moisture near & ahead of fronts – common as we get deeper into autumn. ‘Nicole’ will be battling a good deal of dry air until at least midweek.

Averages below based on climatology for the Atlantic Basin through November:

Saharan dust spreads west each year from Africa by the prevailing winds (from east to west over the Atlantic). Dry air – yellow/orange/red/pink. Widespread dust is indicative of dry air that can impede the development of tropical cyclones. However, sometimes “wanna’ be” waves will just wait until they get to the other side of – or away from – the plume then try to develop if other conditions are favorable. In my personal opinion, way too much is made about the presence of Saharan dust & how it relates to tropical cyclones. In any case, we’ve had several large dust plumes spread west to the Caribbean & Gulf with the peak of Saharan dust typically in June & July.

2022 names….. “Owen” is the next name on the Atlantic list (names are picked at random by the World Meteorological Organization… repeat every 6 years). Historic storms are retired [Florence & Michael in ’18… Dorian in ’19 & Laura, Eta & Iota in ‘20 & Ida in ‘21]). In fact, this year’s list of names is rather infamous with “Charley”, “Frances”, “Jeanne” & “Ivan” retired from the ‘04 list (all hit Fl.) & “Matthew” was retired in 2016. The WMO decided – beginning last year – that the Greek alphabet will be no longer used & instead there will be a supplemental list of names if the first list is exhausted (has only happened three times – 2005, 2020 & 2021). The naming of tropical cyclones began on a consistent basis in 1953. More on the history of naming tropical cyclones * here *.

Surface analysis of the Gulf:

These $200 Razer Smart Glasses Are Only $25 for Cyber Monday